Swallow Tail Revisited
The last time I wrote a blog, I let it sit in my computer for a month before I finally got around to posting it today. In the meantime, so much has happened. I realized I can post PICTURES. I posted one of the many I take from my door, taken May 15th of this year for my last blog. It snowed about an inch. Yes, in the middle of May. Amazing! 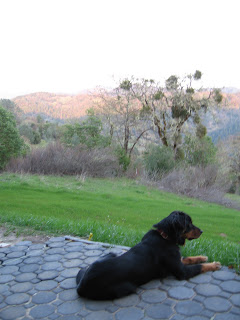 Today, I had some wonderful things happen too. I found all my strawberries were huge and ripe AT THE SAME TIME and that no mice had eaten anything. I think the holes in the hardware cloth are too small for banana slugs, which I’ve only seen this year, twice. The second wonderful thing was that my carrots were perfect. They are sweet and huge, and perfectly formed,  if you count looking like they have two legs. That’s OK, they taste great. Well, they’d taste even better if they were grown outside. But for some reason, they don’t grow outside. They either get eaten by the mice before they get a second set of petals, or they never thrive. So they grow in two big tubs in the greenhouse.


Since I’m dogsitting today, I brought my stuff to my neighbor’s house and realized I’d forgotten something. I took one of the dogs for a nice long walk back to my house and picked it up; it only took 2 hours. We had to stop and look at a dead snake along the way. The snake I’ll hopefully remember to post the picture with this post. At first, coming upon it in the road, it looked like something I’d never seen before. It was like a San Francisco-style tiled bathroom, black and white. I thought, ‘a new snake, I can name it!’ Of course, Tile snake would have been my choice. Unfortunately, when I rolled it over, I discovered it was a king snake, with half the body missing
. Normally they're brown and white and black on the top. Who knew they were ‘tiled’ on the underside?


Driving up the windy road to get to my place last year, I saw a crow carrying a live king in its beak, and the snake was at least 3’ long. Stopping the car to watch, he started picking at it immediately. How the mighty have fallen! We are so careful to avoid the rattlesnake, welcome the king, and curse the crow for different reasons. But they’re all connected by the food chain. Once I grabbed my camera and ran out the sliding glass doors to my house, intending to catch the large king slithering across the front yard. In my haste, I neglected to slide the door shut. Of course, the king decided to visit my cabin.


Which reminded me of the time we lost our boa. We couldn’t find it anywhere. Our apartment in college had a screened-in porch and our friends wouldn’t come to visit unless they could see Euripides in the enclosure. But on any given day, he could be found around the house. When I studied, I’d sit at the dining room table. He’d happily wrap himself around me, and sit with his head on top of mine. So he wasn’t affectionate like a dog, but I could tell he cared. One day, friends were coming over and we couldn’t find him. We looked everywhere. Flashes of snakes coming out of toilets crossed my mind. I searched every room, knowing a snake that big couldn’t just disappear, he was huge.  As I lay in bed that night, I kept thinking about where I hadn’t looked. Where could he be? You can’t hide a snake that big. What made me think of it, I don’t know. I jumped out of bed and lifted the mattress. There he was, comfortably coiled up at the head of our bed. Our pillows masked the telltale lump that would have shown up otherwise. But Mr. King decided he didn’t like the cold floor so much, and slithered back out to the garden, where he lost himself in the lamb’s ears and lavender.  That’s the last time I ever left the door open while I ran out.


Once in camp, I remember finding a dead snake I carried around for days. It was soft and silvery, like mercury. It was so pretty, about 8” long. I didn’t show it to anyone, in fear they’d make me throw it away. I’d just take it out and admire it from time to time.


This isn’t what I started out to write about, but there it is. When I sit down to write, it often occurs to me that writing blogs is so self-centered. Talking about oneself is rather vain, and it seems like you’re pointing to yourself and saying, ‘look at me.’ So as much as I chastise myself for not posting more, I’m battling the feeling of vanity.


As I wrote the previous blog, I got about halfway across my field of vision, to my vegetable beds, which face south. I wrote of my view from east to south, so I should continue the journey, I think. The broad expanse of meadow in front of me is often taken over by various animals at different times of the day, and during different seasons. Sometimes, and most often, it’s deer. Many times during the day, off and on, different species of birds comb the grasses for insects and seeds. We have quail that look like little footballs, which have now taken to nesting in the oak branches that never got cut. The chainsaw has remained stored in the garage, out of the rain. Again, rain stops my outside activity. The grass has grown 3’ since I last whacked it. I’m getting burrs on my pants  (OK, pajama pants). Nothing like turning over in bed an landing on a burr. Or doing your laundry and ending up with burrs in your underthings, which is always the case. They seem to have DNA that leads them to imbed themselves on things that stay warm and close to human bodies.

The gophers have really done a number on the front yard in the last month. Holes everywhere, deep under the house. This is what first drew me to try to eliminate them from the immediate area around the house. I stuck a piece of rebar over 4’ down into a whole behind my grapevines. One, a California red grapevine, is in a gopher cage, the other a Concord, is not. For some reason, they haven’t touched them. This is shocking. They ate my sage, they ate the miner’s lettuce, they ate the tulips, the hollyhock, the ceanothus. Last year the grapes sat there without being touched by the gopher or the birds. I have to wonder what’s wrong with them. Or what’s wrong with the grapes? Even the bear, leaving a few muddy prints on the siding next to the front door (he always comes to the front door, never the sliding glass doors), with blueberry bushes a foot from the door, untouched! I’m not complaining, mind you, just shocked. Since I rescued the baby finches, they've left their marks on the teak charis on the porch. It won't be long before they find the berries. They come for water after the drip system has run, when the afternoon shade has spread and the heat has been swept away on the breeze. I guess it's OK, as long as I feed them seed, they'll leave me some berries.

Of course, we did have 95° weather here after the snow, so the berries got a little dried out. They look rather shriveled. I’ll have to reinstall the drip system. Another task on my to-do list. And in case you’re wondering, the second dog is a nearly blind dachshund that won’t budge unless you give her treats. It would have been three hours there and back if she’d come along. Coyote bait!
Posted by Unknown at 7:08 PM No comments: 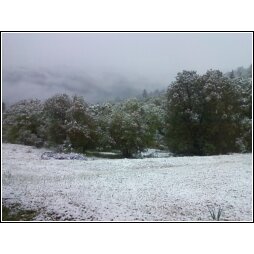